What a day! We spent Jaide and Noah’s birthdays at Chris and Nika’s. Was it awkward? A tad – I won’t lie, haha. But, we had a good time watching the Super Bowl (sorta). They made nachos. Chris was like, “You just want cheese right?” Me, “No, load it up with everything except meat.” Haha, he was surprised, came back and asked about each individual topping (annoying).

Eleven years together, in total! Eleven years… Not a single regret. I loved him with my whole heart. I never thought there would come the day when I would be sitting in the living room shared by he and his wife. Observing their interactions, their relationship, he seems happy. I’m happy for him. He found love. Her kids seem to love him. They lay all over him, hug on him, they are truly a family. So, why does that break my heart? My kids seemed like outcasts, off to the sideline, alone. No real connection.

I won’t romanticize my marriage to Chris, and pretend it was beautiful, and I don’t know why it ended? Truth is, I should have ended it long before he left. I have always been to much of a coward, hiding behind the lie of, I’ll fight until the end to make it work. That’s dumb. Who really enjoys getting beat up, and cheated on? Was I that much of a glutton for pain? Did I really believe that I deserved it? Did I think that Love was supposed to hurt? Some example I was for my children. Downright shameful.

With thoughts of what was and what will be floating around in my head, I cannot dismiss these marriages of mine. Brian. I tried to get him to love me in so many ways. That’s a silly sentence, right? I wanted his love so badly, and never could attain it. I loved him – was it too much, or not enough? That marriage plagues my thoughts at times, I wonder what could I have done differently. There are things I know that I could/should have done differently, would it have changed anything? How many times did he tell me, I only came back so I didn’t have to pay the apportionment. That hurt, and I was like, Okay, I’m still happy you’re back, I love you, I really missed you, this is a dream come true. It was. I knew it was not what God intended, but I convinced myself that God hates divorce, and I was doing the right thing. Accept whatever he says, so he won’t leave. He really pushed that limit.

Truth. He couldn’t wait to find a reason to leave. He hadn’t really returned. He kept clothes and things in the trunk of his car. After he left, I discovered that he was not even really in school. He was leading a double life. Hillary Scott’s Thy Will song came out… I didn’t pray for God to fix my marriage, or bring Brian back to me. I asked God, What do I do? He told me, one day driving home from Aiden’s football practice, “Be still.” I turned the radio off, and asked the kids if they heard that? “Heard what?” Nothing. Then, I was served papers, in September, after getting back from Florida. I moved. The day I moved I was showering, crying, knowing that Brian would never be able to come home if he wanted. Then, I hear His voice: “It’s finished.” Okay, God, okay. I dry my tears, stand up, shower, and even take a quick nap before work. The peace that swept over me was immediate. The divorce proceeded. I received everything I wanted.

Well, almost, everything except closure. Still, I had to learn to forgive. I was angry, without realizing it. Blocking him off from my life, my memory. He still crept in at times. Little did I know, the tears when I heard a song – or skipping it altogether, the accelerated beating of my heart when I was sure I saw him, meant there were some unresolved things. I still needed to forgive those past hurts. I still needed to forgive myself. 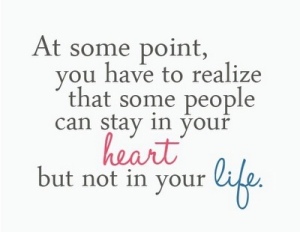 My children are still affected by the names he called me, the times he put his hands on me – to the point my son told me, When we lost our peace, I walked away from God and stopped loving you. Wow! My poor children. He wants to build a relationship with me now. I am happy about that. But, I now know see ever so clearly the choices we make as parents affect our children, and our relationships with our children. I think it’s like this, I should never marry. I’ll never date. I’ll pour into my children all my love. Haven’t we all sustained enough hurt?

I wrote a previous post about Letting Go and it Being a Challenge. Well, it just became easy. I have officially let go. My prayer for that man, is that God, prepare a wonderful woman for Him, and he for a woman, and let them have a happy marriage, ‘Til death do them part. I wish him the happiness that his heart desires. I wish him the love his heart desires. Prepare for him the Proverbs 31 Wife – a virtuous woman, for him. As you prepare him for her. Bless and keep him all of the days of his life. Encamp Your angels around about him. Strengthen him when he is weary. Give him protection wherever he goes. Cover him with Your blood. Keep his spirits lifted, his mind stayed on you. Amen.